Justus Rogers wants to find the right answer—both on the field and in the classroom.

For the WSU Coug’s starting middle linebacker, correct answers during a football game often rely on split-second interpretations of other players’ actions.

In accounting classes, Rogers is looking for similar “keys” that will help him unlock the meaning behind columns of numbers in financial reports.

“What I like about accounting—and this is true in football, too—is that there is usually one right answer, or maybe a few right answers,” said Rogers, an accounting major at WSU’s Carson College of Business. “It’s not like a writing class or a history course, where you are thinking very broadly.”

Football, of course, moves faster than accounting, he says with a laugh.

“When you see the other team’s linemen running to the sidelines, you know the play is going over there,” Rogers said. “You’d better be running with those linemen to get to that ball.”

Committing to the Cougars

Rogers, 21, grew up in a family that appreciates college football. His dad, Michael Rogers—a firefighter and paramedic—was a linebacker for the University of Washington Huskies.

“I’ve always looked up to him as an athlete and a person,” Rogers said. “My dad was the one going into burning buildings to save people.”

At Bellevue High School, Rogers was the team’s quarterback, scoring 19 touchdowns his senior year. His aspirations of playing for a NCAA Division 1 college team were rewarded when WSU recruited him to play for the Cougars.

After red-shirting his freshman year, Rogers moved to the defensive line.

The middle linebacker position is sometimes called “the quarterback of the defense,” said Rogers, now a redshirt junior at WSU. “I’m in the middle, making sure the machine is running smoothly. It’s my job to make sure everyone in the defense is where they need to be on the field.”

“Justus has great presence, great poise, and great leadership,” said Mike Leach, WSU’s head football coach. “He’s an intelligent guy who is determined to improve. His focus on improvement has helped Justus excel as a player, and I believe it will help him as a student and throughout his life.”

Although Rogers’ path to WSU’s football program was straightforward, the 6-foot, 2-inch athlete took several detours on his academic journey. He studied pre-medicine and kinesiology before his aptitude for numbers led him to accounting.

During the fall semester, Rogers took Intermediate Accounting II—one of several classes that prepares students to take the CPA exam.

It’s a tough class, says Jeff Gramlich, the professor who teaches it. The average score on the first exam is 52%, and most students are shocked when they see their grade.

“I’ve never had a starting football player in Intermediate Accounting II,” Gramlich said. “That he is surviving both football and this course in the same semester is quite remarkable to me.”

Rogers’ leadership traits—apparent on the field—also came across in the classroom through his engagement in class discussions, Gramlich says.

Taking the class during football season was challenging, but doable, Rogers says.

“Professor Gramlich is enthusiastic about teaching us the concepts and showing us how they relate to the real world,” Rogers said. “He’ll have us look at quarterly financial statements or McDonald’s income statements. It gives the students a better grasp of why we are learning this.” 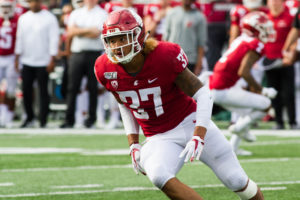 During the season, Rogers spends about six or seven hours daily on football—including weight training, meetings with coaches, and practice.

To stay on top of his classes, Rogers says he “frontloads” each week with his studies. His most intensive homework days are Mondays, which is the football team’s day off from practice, and Tuesdays. On Wednesdays and Thursdays, Rogers tapers his studies.

Rogers is on track to graduate in December 2020, which gives him another season of playing football at WSU. His parents regularly make the trek from the Seattle-area to Pullman to watch their son play, and they’re proud of him as a student and an athlete, he says.

Rogers is minoring in sports management. After graduation, he’d like to find a job where he could use his accounting skills and his knowledge of sports.