A live production of “Dracula” will bring the spirit of a Transylvanian Halloween to Vancouver this fall. The production takes place at 7 p.m. Sept. 26 at the Kiggins Theatre, 1011 Main St., Vancouver. 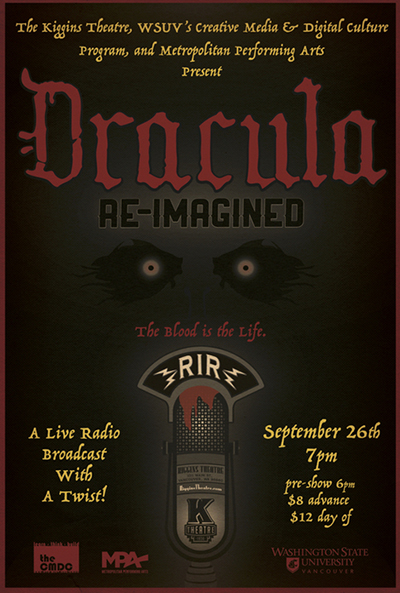 “It’s time to shine up your fangs and get your silver crosses ready,” said John Barber, professor of Creative Media and Digital Culture at WSU Vancouver and head of the Re‑Imagined Radio project. Each Re‑Imagined Radio production features a live re‑creation of a radio drama with voice actors and sound artists. Costumes are encouraged.

Produced and directed by Barber, “Dracula” is based on the 1938 performance by Orson Welles and the Mercury Theatre on the Air. The original radio drama was adapted from Bram Stoker’s 1897 novel of the same name.

“‘Dracula’ is considered one of the greatest horror novels ever written,” Barber said. “The novel examines society’s fears of the unnatural during late 19th‑ and 20th‑century Victorian society. Over time, the focus of its many interpretations has come to be how abnormality can evolve from one source and infect the surrounding society with discord, misfortunes and evil. Dracula, the vampire, infects others with his evil.”

Though the original was aired on radio, the only way to hear the local reboot is to be in the live audience. The doors will open at 6 p.m. Admission is $12 at the door, $8 online through the Kiggins website.

A special VIP ticket is available featuring food and drink at Niche before the performance, a drink during the performance at Kiggins, and reserved seating. Concessions, beer and wine will be available for purchase.

Re-Imagined Radio is a partnership between Barber, Kiggins Theatre and Metropolitan Performing Arts, a local school and resource for aspiring actors, dancers, and singers.