PULLMAN, Wash. – A new exhibit in WSU’s Terrell Library this month highlights the collected books and other media of library employees when they’re not at work.

Called “After Hours 5: Don’t Judge a Book by its Owner,” the exhibit runs through July in the atrium display case.

Started in 2014, the “After Hours” exhibits celebrate the creativity and uniqueness of WSU Libraries’ staff post-work pursuits.

“This exhibit gives folks a way to share passions that otherwise might not have much opportunity to see daylight at our workspace,” said Wendy Blake, a library and archives paraprofessional in the technical services unit and exhibit co-organizer. “Employees of the WSU Libraries were prompted to share the most unusual and/or most meaningful items that have found a place on their home bookshelves.

“Sometimes our interests lead us down unlikely paths, and our different interests are not always closely related to each other,” she said. “There should be some enjoyable discoveries for everyone.” 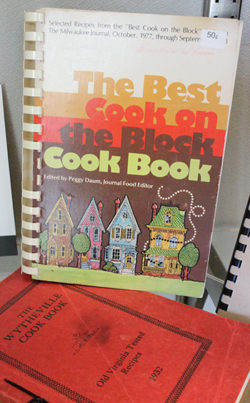 Erin Hvizdak, reference and instruction librarian, shared her collection of community cookbooks, including “The Best Cook on the Block Cook Book.”

“This book has everything I look for in a community cookbook: stains, extra recipes written on scraps of paper and taped to the inside, and inscriptions,” Hvizdak said. “This book is unique in that it includes photographs of the recipe creators—both women AND men, which is rare. It is full of old-world European recipes from residents of the Milwaukee area, closely matching my own background, so it is very meaningful to me.”

Hvizdak also uses “The Wytheville Cook Book.” “This is the oldest community cookbook in my collection, given to me by my mother,” she said. “The recipes are written narrative style and include minimal directions.”

For the exhibit, Mary Gilles, business and economics librarian, submitted the book McGuire, by the McGuire Company, revealing her love of McGuire bamboo furniture.

“This book is the next best thing to owning a lot of their bamboo pieces,” she said.

Gilles also included “The Promotion of Price Competition Where Sellers Are Few” by Frank Kottke for one reason.

“I was named in the ‘Acknowledgments,’” she said. “My lifelong conceit has been to have a book dedicated to me. This may be the closest I get.” 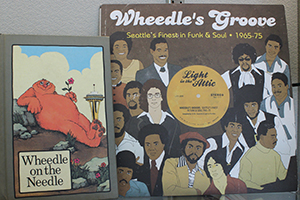 Digital Infrastructure and Preservation Librarian Andrew Weaver entered “Wheedle on the Needle” by Stephen Cosgrove/Robin James for its pictures and for “representing a unique little chunk of Washington history—the best origin story for the blinking light on top of the Space Needle.

“I also love the influence the Wheedle character went on to have, inspiring funk songs (check out “Wheedle’s Groove” on Spotify) and becoming the mascot for the Super Sonics,” he said.

Blake offered a collection of books based on her fondness for charts, graphs and tables and “science from before there were supercomputers for everyone.”

Among Blake’s titles to peruse are “The Dietzgen Maniphase Multiplex Decimal Trig Type Log Log Slide Rule No. 1732: A Self-Teaching Manual” by H. Loren Thompson and Ovid W. Eshbach, as well as “RF Connector Selector” by the American Phenolic Corporation.

“How do you make the things that make our things? Start with the right sort of book,” she said.

Jessica Striffler, library and archives paraprofessional, enjoys singing in her spare time as a way to relieve stress. So she shared the “Mass Sing Songbook” by Sweet Adelines International for the exhibit.

“This organization focused on the art of barbershop,” she said. “It is challenging because it is different from my previous experience, but the all-female choirs/quartets sound amazing.”

Harry Potter in other countries

Conservator Linnea Rash has a specific book in mind when she travels abroad: “I try to find a used bookstore where I can buy the first Harry Potter book [by J.K. Rowling]. I only have a few so far, but I am looking forward to building my collection.”

These include copies purchased in Pullman, in London (where the book is titled Harry Potter and the Philosopher’s Stone) and Rome (titled “Harry Potter e la Pietra Filosofale”). 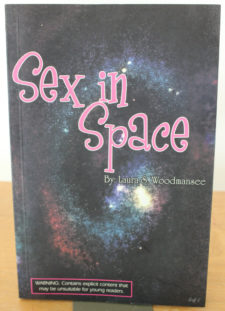 “If the title alone isn’t intriguing enough, this book answers many of the questions you may have about doing ‘it’ in space—has ‘it’ been done in space before, what happens to your sex drive in space, is it even possible to conceive in space and what positions would work best,” England said.

William Clements, digital projects archivist, chose a trilogy of “historical fantasy” novels by Tim Powers about the Romantic Poets and the Pre-Raphaelites for the exhibit: “The Stress of Her Regard, A Time to Cast Away Stones and Hide Me Among the Graves.”

“I chose these books for the unusual bindings,” Clements said. “The first is bound in bleached denim, which is meant to suggest the ocean in which Percy Shelley drowned. The second is supposed to re-create Shelley’s waterlogged journal. The third is bound in ‘cave paper’ with mica chips embedded, which is a reference to broken mirrors in the novel’s plot.”

Nancy Drew as a family tradition 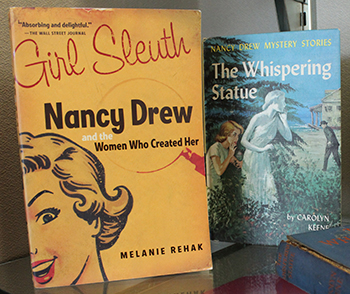 Associate Dean Beth Blakesley “devoured” the Nancy Drew mystery series as a young girl in the 1970s, she said. Then she discovered that her mother was a Nancy Drew fan as well. Both copies of “The Whispering Statue” by Carolyn Keene (1960s and 1937 editions) are in the exhibit.

“The younger me was fascinated by the idea of a book being reprinted and that my mom and I read the same book,” Blakesley said. “Reading Nancy Drew and having different editions of the books led to not only my lifelong interest in mystery fiction, but also to my academic studies of 20th-century American history and fiction, particularly the topic of popular fiction being taken seriously as literature.”

Bonny Boyan, human resources coordinator, contributed 20 pieces of antique sheet music that has been in her family for several generations, inherited from her father. The pieces date back to 1918 or earlier.

“My dad was a musician, from being first-chair violinist in the Los Angeles Junior Orchestra as a child, to learning to play almost every kind of instrument, to getting his Master’s in Music Education, and finally, his favorite, being the trombonist for the Hot Frogs Jumping Jazz Dixieland Band in his later years,” Boyan said. “My mother also played many instruments, mostly piano, and she had the loveliest alto voice. My childhood home was always filled with music from every genre.”