The renovation of WSU’s historic Troy Hall into an interdisciplinary science facility is being lauded by a leading architectural industry group.

The Washington Council of the American Institute of Architecture presented the recently-completed project with a Civic Design award during a ceremony yesterday evening in Seattle. The honor spotlights quality designs achieved when architects and civic clients work together. It will be shared by WSU and the architectural firm of Perkins + Will.

“We’re very pleased,” said Jeff Lannigan, the WSU project manager. “That building had been on our radar for a long time and we basically had to just wait for funding to become available.”

Opened in 1929, Troy Hall served as the original dairy building on the Pullman campus and was home to the creamery, Ferdinand’s Ice Cream Shoppe and many chemistry classes. It underwent a partial remodel in the 1970s but by the 21st century had become unusable and was mothballed in 2010.

Renovation of the 50,202-square-foot brick building began in 2016, after $32.3 million was secured for the project, and the university decided to convert it into a modern, integrated science facility that brings together the Department of Chemistry and the School of the Environment while preserving Troy Hall’s historic roots. 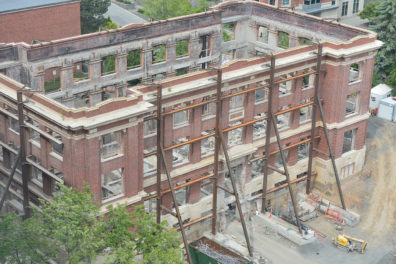 The design retained all of the exterior brick walls, but the interior was gutted and rebuilt using new materials that required fewer bulky support columns, which opened up significantly greater amounts of floor space on each of the building’s four levels. Also, a 6,000-square-foot addition was built onto the north side of the building for additional office and study space.

Other noticeable changes include a reworking of the main entrance, which previously was set atop a large exterior stair case midway up the first level of the building. The main entry now is at ground level, increasing the amount of usable interior space.

The labs, meanwhile, are designed to support student and research chemists but have built-in flexibility to serve engineering, agriculture, biotechnology, medicine, dentistry, nursing, pharmacy, and veterinary students. The goal was to retain the building’s historic feel while creating a modern academic teaching and interactive research environment.

For Lannigan, a key milestone he’ll always remember came when the exterior and interior portions of the project were finally rejoined. The historic brick walls had stood for weeks propped up like skeletal remains as the interior was gutted so the floor-by-floor rebuilding process could begin.

“When we finally got the structure put back together, that was a collective sigh of relief, particularly for the contractor,” he explained. “Here we had this 100-year-old structure that had to be all propped up while this work was being done and the day it went back together, there was a lot of relief.”

Troy Hall was named in honor of David S. Troy, a dairyman from Port Townsend, Wash. He served as a member of the WSU Board of Regents 1910-16, and later became a state representative and state senator.