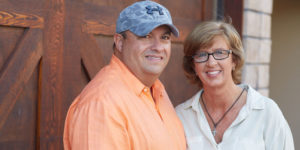 YAKIMA, Wash. – When Rod Cassel met Yakima business advisor Linda Johnson, he was looking for a lifeline. After several decades as general manager at a large, well-established electrical service company, the family-owned business reorganized and he was out of a job.

Nearing 50 with four children to support, Rod said it was a stressful time. “One kid was in college,” he said, “and another one was coming up.”

Rather than panic, he and his wife Brenda called Johnson in early 2013 to discuss plans to open their own electrical contracting business, Core Northwest (http://www.corenorthwest.com/).

Johnson is one of more than two dozen Small Business Development Center (SBDC) certified business advisors who work with small business owners across Washington to help them start, grow or transition a business. The Washington SBDC (https://www.wsbdc.org) is hosted by Washington State University and receives funding from the U.S. Small Business Administration (SBA) and other institutions of higher education and economic development.

Loans a challenge without credit history

Rod had a number of former customers ready to hire him for big jobs, he said, if he could just get his company up and running.

Together he, Brenda and their SBDC advisor talked through the basics of a business plan and then evaluated fixed costs, variable costs and all the other data critical to his success. Johnson gave him spreadsheets to complete for financial projections based on different scenarios.

One major stumbling block was that the Cassels had never used credit before and so they had no credit history to support their loan applications. As banks began dragging out the process, the Cassels felt they had no choice but to go to plan B.

Another electrical contractor in town had invited Rod to join his company and bring his clients with him; anxious to start earning money again, Rod agreed. Revenue soared, but a year later, the owner decided to sell and once again Rod was out of a job.

“We really didn’t know how we were going to survive,” Rod said. He and Brenda returned to Johnson at the SBDC to revisit their business plan for Core Northwest.

The bad news was that this time Rod had no clients waiting in line with million-dollar projects. The good news was that because he had to start small, his startup costs were less demanding.

Rod and Brenda funded their startup by borrowing from their children’s college accounts.

“We had no choice,” Rod said, but the pressure was immense. “We couldn’t afford any missteps so Linda’s guidance was crucial to our decisions going forward. There’s no room for error when you are small like me. My SBDC advisor helped me build a business plan with the money I had available to me.”

His plan was to put $100,000 in the bank before he hired his first employee, which meant that when he needed help pulling wire, Brenda became his electrical apprentice. That was on top of her two full-time jobs and running the household for four children ages 12 to 21. That first year, Rod said, the two of them worked well over 100 hours per week.

Their financially conservative approach paid off and by the second year they saw a 1,600 percent increase in revenue and were able to hire seven employees. They also were able to pay back their children’s college funds with interest.

“We have been so blessed to have grown so quickly and to have earned a reputation that we can be proud of,” Rod said. “I know that we couldn’t have achieved our success without assistance from the SBDC and Linda Johnson.”

And now Brenda and Rod are paying it forward in their community. Core Northwest makes significant contributions to community groups, including local law enforcement, fire departments and youth sports.

“I have seen the greed out there, and we made a promise to ourselves that we would not be one of those companies,” Rod said. “There is nothing more satisfying then helping people and seeing that help make positive changes in one life.”