PULLMAN, Wash. – A book about the 1989 Exxon Valdez oil spill won the Western Writers of America 2015 Spur Award in the Best Western Contemporary Nonfiction category. “Red Light to Starboard: Recalling the Exxon Valdez Disaster” also is a finalist in the annual Foreword Reviews’ INDIEFAB Book of the Year Awards.

The Spur Award is given to book creators – authors and publishers – whose inspiration, image and literary excellence best represent the reality and spirit of the American West.

“I am deeply honored to receive this recognition by a community of writers dedicated to sharing the stories of people and places throughout the American West,” said author Angela Day. “This award acknowledges the importance of the Exxon Valdez oil spill in shaping our collective memories and informing ongoing dialogue about Western values.”

“The award recognizes outstanding work in the eyes of fellow authors. For over 50 years the best of the best have received this award,” said Robert Clark, editor-in-chief at Washington State University Press (http://wsupress.wsu.edu/staffdir.html), which published the book. 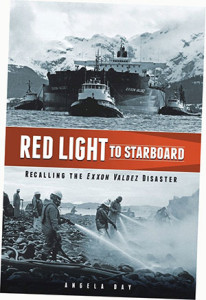 Day wrote “Red Light to Starboard” – her first book – while a political science doctoral candidate at the University of Washington. She documents a story that stunned the world:  the 1989 Exxon Valdez oil spill in Alaska’s Prince William Sound.  She describes futile warnings, regional and national history and governmental and public policy decisions that led to disastrous environmental consequences.

Her intimate portrayal of Valdez native Bobby Day lends a local perspective and conveys the damage suffered by individuals, communities and the fishing industry.

In addition to the 2015 Spur Award, “Red Light to Starboard” (http://wsupress.wsu.edu/new-titles.html#RedLight) is a finalist in the 17th annual Foreword Reviews’ INDIEFAB Book of the Year Awards (https://indiefab.forewordreviews.com/).

Foreword Magazine, Inc. publishes reviews of new titles from independent publishers, university presses and noteworthy self-published authors in the quarterly print magazine Foreword Reviews (https://www.forewordreviews.com/reviews/red-light-to-starboard/). Each year, the periodical selects finalists, which are judged by more than 100 volunteer librarians and booksellers to determine winners in 63 categories.

“Our awards program has become synonymous with quality because our editors set such a high bar on the finalist round, which makes it especially tough for the judges who select the winners,” said Victoria Sutherland, publisher of Foreword Reviews.

Foreword Reviews will celebrate the winners at the American Library Association annual conference in San Francisco in late June. The Western Writers of America (http://westernwriters.org/) convention in Lubbock, Texas, will be in late June also.

“Red Light to Starboard” is available through booksellers nationwide or direct from WSU Press (800-354-7360 or online at http://wsupress.wsu.edu).  See a book trailer at https://www.youtube.com/watch?v=OWbCmjNHOyM.