PULLMAN, Wash. – The film’s producers call it a tragic love story that inspired a movement. Critics describe it as a gripping, emotional and deeply moving documentary.

“Bridegroom” will be shown free at 2 p.m. Monday, Feb. 10, in the CUB L60 Butch’s Den at Washington State University. Co-producer Shane Crone will introduce the film and take questions from the audience afterward. The film is rated R and is not suitable for children.

The tragedy, which premiered in the fall, depicts the loving, committed relationship of Crone and his partner Tom Bridegroom. When Bridegroom had a fatal accident, Crone was without legal marriage rights and was shut out from hospital visits or attending the funeral. 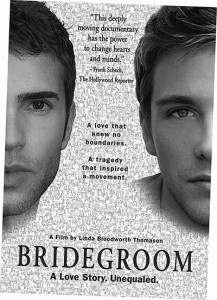 Crone was awarded the Harvey Milk Civil Rights Award and was named one of Instinct magazine’s leading men of 2012. The film has earned audience awards at the Tribeca Film Festival and Outfest Film Festival.

Crone co-produced it with Linda Bloodworth Thomason, creator of the “Designing Women” TV series and director/producer of the Bill Clinton biographical film, “Man from Hope.”

The idea for the film began with a 10-minute video Crone posted on YouTube following Bridegroom’s death. In “It Could Happen to You,” Crone expresses frustration and hurt – not only for the loss of a loved one, but also for the way he was treated by the hospital and Bridegroom’s family.

The video went viral and sparked a flood of social media dialogue. The film is hailed for opening discussion about marriage equality and human rights.

“This isn’t about being gay or straight,” said Heidi Stanton Schnebly, director of WSU’s Gender Identity/Expression and Sexual Orientation Resource Center (GIESORC). “It’s about loving someone and wanting to protect that love.”

She said a leading human rights magazine reported eight states legalized marriage between gay couples in recent months, bringing the total to 16 states and comprising about 37 percent of the country’s population.

With the recent attention to the topic, she said, Crone’s visit is especially timely.

“It will be great to have Shane here because he can easily relate to college-age students,” she said. “He utilizes social media effectively and that has helped him make these issues really relevant to people.”