PULLMAN, Wash. – Be careful little hands what you type. If you didn’t know you could be found liable for posting links on your or your company’s website, making negative comments about someone in another state or blogging about a new product before it’s released, now is the time to obtain a copy of Kimberly Houser’s new book “The Legal Guide to Social Media Marketing.”

The book’s 10 chapters address the legal issues specific to those using social media, whether they are bloggers, large corporations, employees, small businesses, website owners, video producers, podcasters or simply those who post for fun.

“Despite the easy entry into this field, many new users of social media are not aware of the enormous legal risks involved in their online activities,” says Houser, attorney and clinical associate professor of business law at Washington State University.

Posts can lead to pink slip

“On a personal level, many people post thinking they are texting a friend,” says Houser. “The law looks at it more like writing an article for the New York Times. In other words, if you wouldn’t put it in the New York Times with your name attached, don’t post it on your Facebook wall.” 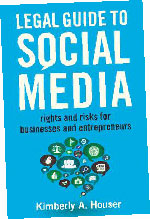 As an example, Houser refers to a case where a BMW salesperson was fired for posting photographs of a dealership car that had been accidentally driven into a pond with the caption: “This is your car. This is your car on drugs.”

In reviewing the employee’s Facebook postings, a judge determined that the posts about the car were neither protected nor concerted activities subject to protection under the National Labor Relationships Act and were the basis for termination.

Think before you link

Just because something is on the Internet and does not have a copyright notice attached, does not mean it is in the public domain, Houser warns readers. Chapter two illustrates a case where owners of a website were sued by Disney Enterprises for $2.765 million for linking to movies on third-party websites.

Houser says a general rule of thumb is that a link to another site’s homepage will probably be acceptable, whereas a link to an internal page, also known as “deep linking,” could be found to be infringing.

When using links on a website or in posts, Houser advises to clearly state that the link is not an endorsement of the other site and that you are not responsible for the other site’s privacy policy or terms of use. More important, check the terms of use of the site being linked to so you are assured linking is permitted.

“Because of the possibility of infringement, make sure you do not link to a site that contains defamatory material or copyright infringing material,” she says.

“I can’t stress enough how laws in different states can result in different results,” says Houser in reference to a case in California where Apple sued several unnamed reporters for posting about new Apple products prior to their release to the public. The California Court of Appeals held that online reporters were safe under journalist protection required by the First Amendment and that Apple could not proceed against them.

But in an Oregon case, a federal judge determined that an online reporter was not a journalist, and the failure to recognize the reporter’s blog as a news report resulted in a $2.5 million defamation judgment against her.

“The idea for this book began a number of years ago when I was searching for a legal guide I could recommend to my law clients who were beginning to set up websites and discovered that there weren’t any such books out there,” Houser says. “I felt that people needed to understand the risks involved in online posting and knew that I could provide that information.”

The 208-page book, published by Allworth Press, is available at online bookstores and in The Bookie on the WSU campus.